The Letters of Horace Walpole 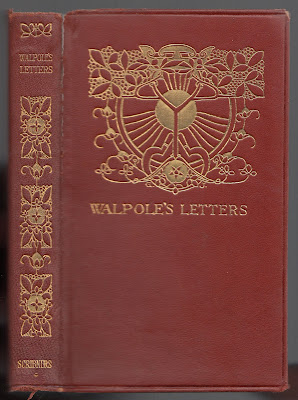 I am having a fine morning of old technology. The primary contact with a more sedate era is a beautiful edition of Walpole’s letters published by George Newnes in his Thin Paper Classics Series, bound in limp lambskin, 6.5 in.x4in. .75in. Thick, gilt top edge, endpapers by Garth Jones. pp.849

My fountain pen is a Lamy Logo with their black ink. I’m not sure about this one. It,s taking a while to get used to and it,s too long with the cap posted.

My notebook is Leuchtturm 1971, a nice gift.

As I read I have my tablet to one side to look up the cast of characters as they appear. The Ency. Brit. bought at enormous expense is in the attic . (I pulled out the volume with a bio of Lady Mary and found much less information in it than Wikipedia)

Horace Walpole (1717-1797) was the son of the Prime Minister. The book opens with letters to Richard West, a Cambridge chum, a lunger poet that died young. They are light, airy, gossipy. He remarks of Lady Mary Wortley Montague:

Did I tell you Lady Mary Wortley is here? She laughs at my Lady Walpole, scolds my Lady Pomfret, and is laughed at by the whole town. Her dress, her avarice, and her impudence must amaze any one that never heard her name. She wears a foul mob, that does not cover her greasy black locks, that hang loose, never combed or curled; an old mazarine blue wrapper, that gapes open and discovers a canvass petticoat. Her face swelled violently on one side with the remains of a-, partly covered with a plaster, and partlv with white paint, which for cheapness she has bought so coarse, that you would not use it to wash a chimney.-In three words I will give you her picture as we drew it in the Sortes Virgilianae- Insanam vatem aepicies.

At this time she was in hot pursuit of Francesco Algoretti. Or had she caught up with him? She did not spare his youth, he being a mere 28 and she 51. The whitewash was a early form of cosmetic pollyfilla to disguise the cratering of smallpox which ruined her beauty. She promoted the practice of vaccination a la Turke.

Walpole has a natural easy flowing style. You hear his voice and imagine his raised eyebrows. There is no attempt at close description of the sights.

Dear West, One hates writing descriptions that are to be found in every book of travels; but we have seen something to-day that I am sure you never read of, and perhaps never heard of. Have you ever heard of a subterraneous town? a whole Roman town, with all its edifices, remaining under ground? Don't fancy the inhabitants buried it there to save it from the Goths: they were buried with it themselves; which is a caution we are not told that they ever took. You remember in Titus's time there were several cities destroyed by an eruption of Vesuvius, attended with an earthquake. Well, this was one of them, not very considerable, and then called Herculaneum. Above it has since been built Portici, about three miles from Naples, where the King has a villa. This under-ground city is perhaps one of the noblest curiosities that ever has been discovered. It was found out by chance, about a year and half ago. They began digging, they found statues; they dug, further, they found more. Since that they have made a very considerable progress, and find continually. You may walk the compass of a mile; but by the misfortune of the modern town being overhead, they are obliged to proceed with great caution, lest they destroy both one and t'other.

His complaint that the antiquities are being neglected is still heard in our time. They have so many of them. It’s a yard to pick up or more correctly, not pick up.

I am very glad that I see Rome while it yet exists: before a great number of years are elapsed, I question whether it will be worth seeing. Between the ignorance and poverty of the present Romans, every thing is neglected and falling to decay;