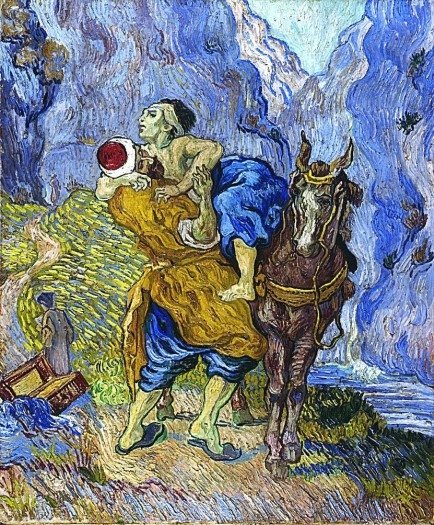 A couple of members of the Liberal Truth Society have put out a booklet (71 pgs. in epub ) which is free and can be downloaded in various formats or shell out for a paperback $5.38. It’s called Thinking Critically About Abortion with underneath that title its general conclusion: ﻿Why Most Abortions Aren’t Wrong & Why All Abortions Should Be Legal.

As far as I can see there’s nothing new in it; the misdirection into a discussion about personhood is produced as a folding body press and victory roll in eristic wrestling terms. I look at the little creature swimming on a sonogram and for me that’s deictic.

The cover of the paperback shows the painting by Van Gogh of The Good Samaritan done when he was a patient in the asylum. Is using that image ignorance or insolence? Can they be implying that good doctors will abort for free at a cost to themselves? Hardly, that would ruin the trade.

Those philosophers represent the priests of the Enlightened Church of Reason and the Levites of rationalisation. The Americans who are bringing in new laws about heartbeat and enforced cut off points have the right idea. This is an issue like slavery where persuasion does not work. Law does.
Posted by ombhurbhuva at 21:06