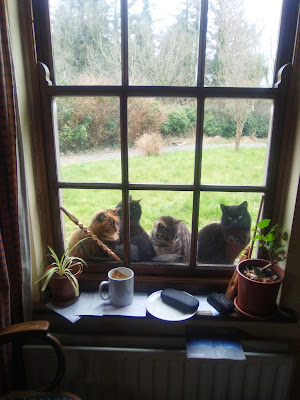 Following the well established internet tradition here is a photo of my cats. From your left, Chess, Jade, Tabs and Blaze. Chess is the mother of Jade and Blaze and Tabs came along as a stray already pregnant with 3 kittens who later became the prey of a dog fox, we presume. Daniel Dennett is inclined to disallow consciousness to humans by which he means consciousness as usually understood by psychologists and philosophers. I on the contrary allow that cats have a degree of consciousness a what’s its like to be a cat. Tabs had a difficult early kittenhood and is mostly very wary and avoids contact. After her sterilisation operation when back home she did a strange thing which she had never done before. Nor has she done it since. Pathetically she jumped on my lap to be comforted, the poor creature. She lay there very quiet.
Posted by ombhurbhuva at 09:05